The electrically assisted bicycle offers you the best of both worlds. Legally they’re treated like a bicycle which means no helmet, no tax, no insurance etc is required. Having said that, It makes a lot of sense to always wear a helmet and at least insure against theft and third party claims. 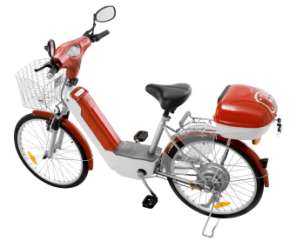 Being powered you can take the strain out of climbing hills or just relax when on the level. It’s interesting to note that statistically you are much more likely to actually use an electric bike than a pedal bike – perhaps it is because you pay more for them or perhaps because they’re less effort going uphill.

How Much Do Electric Bikes Cost?

Just like any vehicle, there’s a range of prices. You can get a new electric bicycle for under £400.00 by shopping around or you could pay a couple of thousand. It’s probably best to spend some time researching what the ideal is for your circumstances but I’d tend to go for a cheap one to see how you get on first and then upgrade if you need to.

They seem to fetch reasonable money second hand so you don’t lose much by trying first before buying the top of the range bike!

How Green Are Electric Bikes?

Well in one sense no powered vehicle is totally green. However, the electric bike takes you many miles on the equivalent to a gallon of petrol. If they were run on petrol, you’d be getting 800mpg to 2000mpg!

Of course, to be really green you want your electricity supplied on a green tariff. Do remember that electric bikes use batteries and these eventually have to be disposed of. The good news here is that the technology is coming on in leaps and bounds and we can expect improvements in battery life. The latest Super Charge Ion batteries from Toshiba charge up in just 30 minutes as against a typical charge time of 4 hours. They’re investing $224 million in a plant to manufacture them.

How much do Electric Bikes cost to run?

It all depends on how much you use them. As I said above, you get the equivalent of 800mpg so the answer is pennies rather than pounds. Of course you can have service costs but the bicycle is just that, a bicycle so mainly you should be able to do it yourself.

Yes, of course they are! The rules are a little complicated (name me a law that isn’t) but the simple version is this: