What Fuel To Choose for Cooking in the Kitchen

If you’re refitting a kitchen then you’re in a fortunate position as you can choose the cooking appliances that you want rather than those that were already there. But what to go for? We’re looking at the options available and running costs. 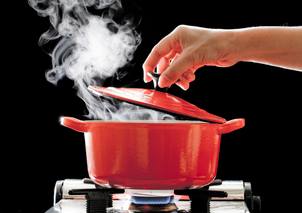 Because you can split hobs, grills and ovens into almost any combination you can think of and afford, we’ll look at those separately as we go.

Because the amount of energy we use for cooking is quite small, especially compared with heating, it really doesn’t make a lot of difference which fuel you choose. Mains natural gas is the cheapest with electricity and LPG tanked gas about the same next. Oil, solid fuels like coal, wood are the most expensive unless you have a source of free wood.

Gas is a low cost fuel although there is little difference in running an oven, you will save on the cost of running the hob as gas gives instantaneous, very controllable heat.

For me this is the best fuel for a hob. It’s instant and very easy to control. It’s also very easy to see how high it’s set.  You don’t need heavy pans or pans with a perfectly flat base either. The cheapest pans you can find will be just fine. Carbon steel pans are quite cheap. If you want the best pans for a gas stove, there’s good advice on The Prince LA web site.

Gas gives a slightly higher risk of fire. If you’re frying at high temperatures the smoke can catch and flare up. It’s happened to me many times but apart from a surprise at the flare, it’s not actually been a problem.

Many cooks swear by gas. Gas ovens bake better cakes, produce a better Sunday roast as my Mum says.  What she really likes are the different heat zones in conventional ovens. Yorkshire pudding at the top, meat and roasties in the middle and plates warming on the base.

You can get fan-assisted gas ovens which are marginally cheaper to run and have an even temperature throughout the oven. (see electric fan ovens below)

LPG Gas is usually supplied in tanks that are stored outside with the gas being piped into the kitchen to supply the cooker. Normally you have 2 tanks so that when one runs out, you swap to the second whilst awaiting a replacement for the first. LPG works out at roughly twice the price of piped gas.

The only difference in the cooker between LPG and Natural Gas is in the injectors. Most manufacturers can supply LPG injectors often for free or at nominal cost for their cookers and hobs – just ask at the shop. NB these must be fitted by a qualified person – not a DIY job!

There are 3 types of electric ovens:

To operate efficiently the hobs above all need very flat based pans. With ceramic and solid plates, a heavy weight pan will work better which takes a while to heat up and cool down. This makes them even harder to control delicately. The number of times I’ve turned creamy scrambled eggs into leather using an electric hot plate!

What I really dislike the most about electric hobs is that they remain dangerously hot for quite a while after you’ve finished cooking. I’ve had one severe burn by putting my hand down on a hot hob.

Unlike the other electric hobs, induction hobs do not heat up much. There will be some residual heat from the saucepan transferred back to the hob but by far the safest for my money.

I think these are more a lifestyle choice than efficient cookers. In fact you need a pretty good income to feed them. They look great, some love cooking on them but boy do they cost a packet to run. There are gas fuelled versions which are slightly less expensive to run. Often they run radiators as well and are part of the house heating system.

If we bought a house with one of these, we’d sell it! They fetch a fair price second hand. Controlling the ovens was an art we never quite got right. Ages to heat up and either burning or too cool to cook. OK, some people love them but why is mystery to us!

Like the solid fuel / wood cookers below, great in winter with a toasty kitchen. Terrible in summer.

In effect you have a combined heater and cooker. That’s a benefit and a drawback. In the winter the kitchen is lovely and warm but in the summer, your hot meal means the whole kitchen is sweltering.

Our country living friends tend to have both a woodburner and an LPG gas stove for the summer. With solid fuel heating you can hold stock, ensuring that your home will be warm even in the most adverse weather conditions. Whatever the weather, you don’t need to worry about supply failures or power cuts. Unless your woodpile is under 3 feet of snow!