Make Money from Your Greenhouse – A Home Business

One of the most useful additions to any gardener and especially to anyone growing their own is a greenhouse but few realise that a greenhouse can be made to pay for itself and even to make money. 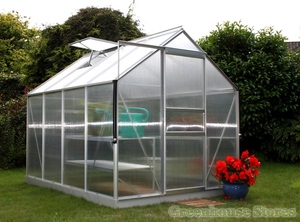 This polycarbonate greenhouse is ideal for starting seeds and young plants

A retired friend of mine has built up a nice hobby business from her greenhouse. She’s got a passion for tomatoes and likes to grow rare and heritage varieties. She both buys seed and saves her own but either way ends up with far more seeds and young plants than she needs.

She started by putting up a sign on her gate “Tomato Plants for Sale” which resulted in some sales.

With each customer she would have to explain what heritage tomatoes were and what the individual varieties were, which took a fair bit of time. So she wrote little fact sheets for each variety that they could look through whilst she was working.

The customers kept asking if she had other plants as well such as chilli peppers and cucumbers. Once again she decided not to go for the common varieties that can be bought from most garden centres but to grow unusual ones. By the second year she was getting repeat customers and recommendations were sending new customers to her door.

Despite this she still had a lot of wasted plants that she didn’t need and had not sold so she decided to take a gamble and looked into taking a market stall on a casual basis and selling at some local car boot sales.

As well as her tomatoes, she was now selling sweet peppers, chilli peppers, cucumbers, and aubergines but a number of customers had admired her hanging baskets and planters that she started off in her greenhouse so she decided to sell those as well. Now she also does summer, autumn and winter baskets and planters plus cacti and house plants.

The amazing thing is that she does all this from a small 6′ by 8′ greenhouse. She has a larger greenhouse that she grows her tomatoes to crop in but all the seedlings, the cacti and the planters are grown under heat. The house is glazed with twinwall polycarbonate which is much better at retaining heat than glass and heated with a small thermostatically controlled fan heater designed for greenhouses.

Her fixed costs are the depreciation on the greenhouse and fittings. For tax purposes this is usually taken as 25% but in reality the greenhouse should last at least 10 years. An 8 by 6 low-cost polycarbonate greenhouse like this one from Greenhouse Stores, can be bought for under £300. Add another £100 for fittings and we’re looking at £40.00 per year plus about the same for electricity for heating.

The cost of a seed, quality compost, 3” pot and label works out to about 23p a plant. The hanging baskets and planters cost varies depending on the size and plants used.

The cost of a car-boot sale varies but many are just £5.00 to enter. A market stall on a casual basis works out to around £30.00 often less, add to both some £10 for the cost of fuel to get to the site and back.

Profits depend on sales, she tells me her worst day was a car boot where she only sold enough to cover her costs and that was by slashing the prices. Usually though she gets £1.50 to £2.00 per plant and with a good market or boot can sell £200.00 worth showing her £150 profit for the day. She says that the first good day’s trading covers her annual costs and the second is profit.

Articles on the Frugal Garden