April is great, the soil is warming up and spring should definitely be here. Do keep an eye on the weather forecast though, even in the south of England a cold snap and snow are not unknown in April and the occasional frost is to be expected. Keeping horticultural fleece on standby in case of cold weather is a good idea. Although some years April seems more like June, the first rule is never trust the weather. 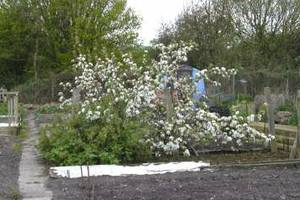 Do remember the weeds are springing into action, so keep the hoe going. Don’t forget, a sharp hoe is the best friend a gardener can have. Just slide it back and forth slightly below the surface of the soil and you’ll stop the weed seedlings in their tracks.

There’s quite a list to sow and plant outside, especially if March has not been suitable and even if it has been reasonable the successional sowing continues.

Easter usually falls in April and Easter is the traditional planting date for potatoes, but any time in April will be fine. Easter is a moveable feast anyway.

It’s not too late to get Jerusalem artichokes planted, although you are pushing the edge now so the sooner they go in the better. It’s also the time to start that totally unrelated, except by name, globe artichoke.

The last sowing of broad beans can go in the ground directly or into pots for planting out later. Another sowing of peas can go in and if you want to impress, you can start a few dwarf runner beans in pots to grow in the greenhouse. Unlike our normal runner bean, these dwarf plants will thrive in a large, say 20cm, pot and provide an early treat.

The normal runner bean is not at all hardy and so we need to plan carefully. Plants outside that have grown too large to protect will be killed if a late frost arrives so start off in pots towards the end of the month. These can then be planted out mid-May and if a frost should strike will still be small enough to protect with fleece or even newspapers.

French dwarf beans can be started now, again in pots preferably in the greenhouse but definitely under glass. Just start a few because the risk of losing them is high this early in the season and the May sowing often does best, arriving as the frost risk is completely past.

Climbing French beans can be started in pots, treat just as runner beans and remember that frost risk. The Borlotti bean, which is grown for the dried bean rather than the pod needs the longest season you can provide so if you can only protect a few climbing beans, these are the one to start first.

Onion sets and shallots can go out as well, but do be quick with the shallots since they do like a long time in the ground. Any onions from seed started in modules really should be ready to go out by now as well.

Continue successional sowings of the brassicas in modules, moving on to small pots (8cm) and then to 15cm pots if you are cursed with clubroot before planting out.

Your brassicas to plant out:

Don’t forget to keep sowing lettuce and salad leaves every fortnight or three weeks to keep a continuous supply along with radishes and spring onions. A successional sowing of kohlrabi, beetroot, spinach beets and chards can go in along with true spinach.

Carrots do well sown now but the carrot root fly is around. Covering with fleece is the best protection against this pest but do ensure the edges are to the ground so it doesn’t sneak in.

If you’ve not already done so, get those greenhouse tomatoes, peppers and aubergines started early in the month. Better late than never. You also start the outdoor cucumber off in April, bringing it on to plant out when all danger of frost has passed by.

Towards the middle or end of the month start the sweetcorn in pots or toilet roll inner tubes closely packed in seed trays. This assumes you will have cloches available at planting out in mid-May to insure against the risk of one late frost and get them away well.