Onion sauce used to be a standard, served with gammon or thick bacon chops and often poultry. Come Christmas, no turkey dinner was complete without onion sauce. This easy onion sauce recipe also forms the basis for a bread sauce and so is extremely frugal. 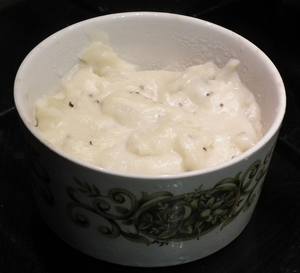 This onion sauce recipe is very easy to make and it will keep for a couple of days in a fridge so can be made in advance for Christmas.

The other classic British sauce for Christmas and to serve with poultry and game is Bread Sauce.

Method for the Onion Sauce Recipe

To just make onion sauce without the bread sauce, halve the amount of milk and cream and don’t include the cloves.

The remaining 260ml (½ pint) of is mixed with the breadcrumbs for the bread sauce which is covered in detail here: Bread Sauce Recipe.

Posted in All Recipes, General Recipes, Poultry and Game Recipes