I love Chinese chicken & sweetcorn soup so I decided to use the leftovers from a roast chicken dinner to produce this. Served with a hunk of crusty home-made bread, it made a filling lunch for 4 or could have been stretched easily to serve 6. 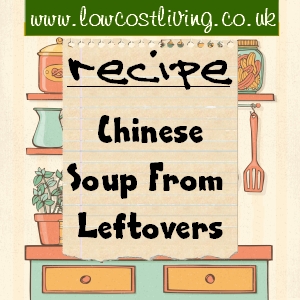 It’s not greatly different to the Chinese chicken & sweetcorn soup you would get from a takeaway or in a restaurant except that it is a little heavier due to the potatoes, which makes it a meal rather than a light starter soup.

This really isn’t meant to be a fixed recipe, it’s more of basis to give you an idea how you can turn what a lot of people would just waste or at best compost, into a delicious meal.

I used a pressure cooker, mainly for convenience and speed, but the same could have been made just using a large saucepan with a lid and more time, perhaps an hour simmering.

Fresh ginger is a little better if available. The number of stock cubes depends on how strong your stock has turned out. I found 3 Oxo was right this time.
The potatoes are optional, of course. If you had mashed potato left over that would work but I don’t think roast would be quite right.

Another option we have used in the past is to add a pack of noodles to the soup to bulk it up. The soup can be frozen into portion sizes.