There’s never enough space for growing everything you want, even in a large garden or allotment. Even if there is a space, it may not be in a growing area. If only one could just make a bed anywhere without lots of preparation.

This year I decided to experiment to see if it was possible! 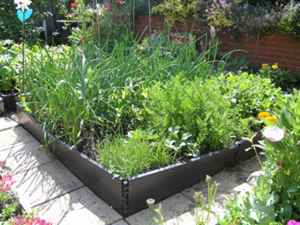 The first stop was at a local garden centre where I bought a couple of instant raised bed kits. These are heavy-duty plastic side length pieces that fit together to make a 1 metre square box. Attaching two of these kits together made a 2m x 2m square that was around 30cm in height.

The kits come complete with joining pegs that are hammered into the ground. They can then be filled with soil and compost. As I needed to get some new topsoil, I was able to use some of this when the load was delivered.

My raised bed went on an area of ground near a Victoria plum tree where my chickens had previously been ranging, so the ground was pretty clear of weeds, but the raised bed garden could be placed on flagstones if necessary. I put some flagstones down around the bed to make a path. In fact, I was so pleased with the overall effect that I went out and bought another couple of kits to grow some early potatoes. Once harvested, courgette plants that I’d started off in the greenhouse followed them.

My soil is pretty chalky and has lots of stones in it. Trying to grow carrots has always been a nightmare because they could never grow long and straight, only forked and knobbly – and you try peeling those! This year, I’ve produced wonderful carrots that revelled in the freedom of deep topsoil without stony obstacles. In fact, I suspect that I’ve become something of a carrot bore. (Would you like to come and see my carrots? Sad isn’t it?)

Sweet corn, runner beans, dwarf beans, onions and lettuces have also graced my raised bed and (dare I say it out loud?) slugs and snails don’t appear to have discovered it. Perhaps the wall is a barrier, although in recent years they’ve demonstrated that climbing up to eat my clematis was no great feat for them. Maybe they just don’t realise that beyond this wall there are succulent delights.

There don’t appear to have been any other pests either. Perhaps my practice of growing vegetables and flowers all together puts them off.

There are all sorts of dubious claims made for companion planting, but there’s probably a grain of truth in the fact that some plants offer protection to others. The fact that there are flowers growing around the vegetables also seems to provide camouflage against raids from the birds that I’ve fed all winter.

The raised bed kits are not that cheap – from around £29.99, but shopping around may produce cheaper ones. It’s also possible to make your own, of course, although it might not be as easy to assemble and dismantle as a bought one.

At the end of the season, I shall dismantle the beds and store them in the garage. (Of course, we don’t use that for cars – what a waste of space that would be!). My chickens can then roam around to their hearts’ content. They’ll enjoy scratching about and clearing the soil of any pests that have been unwary enough to take up residence, and their droppings will add fertility to the soil. Come the spring I’ll start again.

In fact, I’ve already starting planning, with some of next year’s seed catalogues at my elbow.

This article from 2005 was written by Katie Thear, a pioneer of the self-sufficiency movement  she was the author of a number of books as well as hundreds if articles on poultry keeping and other subjects of interest to smallholders, downshifters and those looking for the good life.

Articles on Frugal Growing Your Own Fruit and Vegetables