I find it quite amazing that some people still use old fashioned incandescent light bulbs when modern low energy bulbs are so much cheaper to run even if they are a bit more expensive to buy. The savings you can make may surprise you as they are that high. 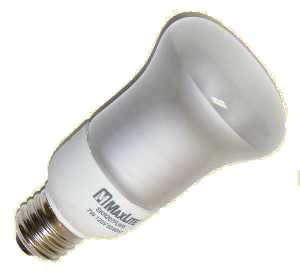 These were invented in 1878 and work by heating a thin wire in a vacuum. Cheap to make but they are quite short-lived, 1,000 hours on average. They are very inefficient, 95% of the energy used just turns to heat.

Halogen lightbulbs are very similar in operation to standard bulbs but slightly more efficient. Most halogen lighting is based on 12v systems which require transformers. These also waste energy. Despite often being described as low energy, they are not.

By the 1950s a new type of light, the fluorescent tube, was coming in. Far more energy efficient than incandescent bulbs they were originally installed in commercial premises that required bright lighting such as shops and factories. The longer life of the bulb was also a cost saver as many of the light fittings were high up and cost money to change.

The first compact fluorescent lights (CFL) appeared in 1980. Large, very expensive, heavy bulbs compared with standard bulbs incorporated a folded tube and the electrics in one unit. By the mid 1990s smaller bulbs were on the market and the price was falling fast to the point where some energy suppliers were able to give them away.

Initially they took minutes to warm up and reach full brightness but today CFLs are bright almost immediately. The bulbs last between 10 and 20 times as long as incandescents whilst using just 20% of the electricity.

These are the latest technology and set to replace CFLs over the next few years. They are roughly twice as efficient as CFLs and theoretically should last 50,000 hours against the CFL’s 10 to 20,000 hours.

In practice at the moment the manufacturers tend to quote 25,000 hours life. Possibly due to the electronics that support the bulb when on mains voltage. Often cheap Chinese imported bulbs fail very quickly as they are built for the European 230v standard and UK voltage is a little higher at 240v + Higher quality but more expensive bulbs will last the stated life and their price will drop over the next few years.

Buy from reputable online specialists or stores like Wilko where you get quality LED bulbs that will last the stated life in the UK.

A big plus of LED lighting is that they natively run off 12V DC systems, ideal for off-grid solar and wind systems powering batteries without an inverter to give 240V AC

Replacing that at the end of its life with an LED bulb makes sense as, over the same 20,000 hours running it will save an additional £112.00.

We’re moving all over to LED lighting where the lights are on for a significant period and using up the CFLs in areas where the bulb is only on for short periods like the shed.