It’s the most common method of cooking our vegetables. Approved by our parents, grand-parents and great-grand parents but is it really the best way to cook vegetables? 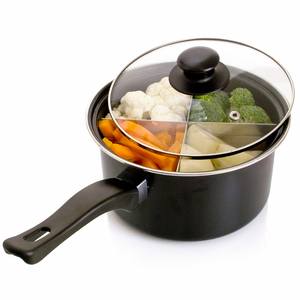 Saucepan with Divider to Cook 4 Vegetables at Once

All cooking destroys some vitamins and also removes vitamins from the food. Different cooking methods will remove more or less depending on time and temperature used by the method. This is why pressure cooking and microwaving are so good at retaining vitamins; they are fast.

One of the worst ways to cook vegetables, from a vitamin retention viewpoint, is boiling. It’s not so much that vitamins are destroyed, it’s that vitamins are removed from the vegetables and end up in the cooking water. However, boiling is easy and convenient.

Over-cooking, the famous cabbage and sprouts boiled for hours, will really affect vitamin content but most cooks nowadays don’t over-cook their vegetables. There are still things that most of us could do better.

Commercial freezing and properly done home-freezing retains vitamins quite well, along with flavour and texture. See How to Freeze Vegetables on our sister web site.

If you can, let the frozen vegetables defrost before starting to cook them.

Rather than heat a pan with water and vegetables, add the vegetables to boiling water or boil the water in a kettle and add just the needed amount to the vegetables in the pan.

Use Less Water in the Saucepan

Use the minimum amount of water you can in the pan. With peas or broad-beans, for example, use just enough water to cover the contents. This reduces vitamin loss, energy usage and time.

Always put the Lid on the Saucepan

Putting the lid on the pan will help hold the heat and reduce vitamin loss and energy usage because it will be faster. In trials I’ve reduced the cooking time by up to a third – just by putting a lid on the pan.

Once boiling, reduce to a simmer. Usually we turn the heat to minimum and the water remains at around 95°C which is perfectly adequate to ‘boil’ vegetables or boil an egg.

Use the Cooking Water

Since as much as half of your vitamins could be dissolved in the cooking water, use it for making a gravy rather than fresh water. Water from boiling an egg can contain some minerals dissolved from the shell. Once cooled it can be used for watering house-plants.

At one time it was usual to have broad-beans in a white or parsley sauce. Cauliflower in cheese sauce is a particular favourite in our house. Rather than boiling in water, simmer in milk. Use the vitamin enhanced milk to make a sauce to accompany the meal or reserve in the fridge for use in a sauce the next day. 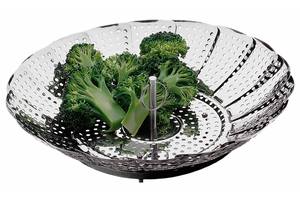 Collapsing Steamer Basket for use in Saucepan

There are two types of steamer, three if you count electric powered steam cookers, but we’ll consider the two hob-top steamers. The type that sits inside a pan, opening out to form a dish and the type that sits on top of a saucepan, sometimes in two tiers.

The type that sits in the pan uses little water and because the heat is transferred by the steam condensing on the vegetables being quickly a lower temperature than in boiling water, better in terms of vitamin retention. Use the cooking water which will still have vitamins dissolved in it.

As good as, if not slightly better, than boiling for energy usage as well.

These were first really promoted in the second world war as an energy saving method. Cooking an entire meal on one ring, whether electric, gas or coal. A typical wartime meal could be a savoury suet pastry pudding or pie, some vegetables that were added towards the end of the cooking time in muslin bags and potatoes steamed in the top tier.

It required a fair degree of skill to get the timing right and often the results were some undercooked or overcooked food or even both in the same meal.

Nowadays we’d cook that savoury pudding either in a pressure cooker or a microwave. Our multi-tier steamer was used a few times and eventually donated to a charity shop after sitting unused for a year.