Microwave Ovens Guide – Which Oven is Best for You?

Despite the foodies disdain and contempt, the microwave is found in over 90% of British kitchens. Don’t be tempted into buying a fancy one though – the cheapest will do the job for you as this microwave ovens guide shows. 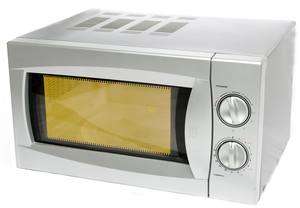 If the simplest and cheapest microwave does the job, why pay more?

Back in the 1940 British scientists developed a gadget called a magnetron which enabled smaller and more accurate and powerful radar than the Germans had. So important was this that a copy was shipped to the USA in case the Germans invaded  us.

Later the Americans realised that standing in front of high power radar was dangerous as it was cooking them! This led to the development of the first microwave ovens – initially called Radar Ovens. The radio energy causes water to heat up and this in turn cooks the food.

Microwave Oven Turntables or Not?

The beam of microwave energy going into the oven cavity mainly heats things in the beam although some energy bounces around the cavity. To evenly heat the food the turntable, on which the food sits, rotates moving the food around the cavity and equalising heating.

Some expensive microwave ovens have deflectors that scatter the beam around the chamber for the same heating effect. Having used both types, the cheaper turntable is nearly as good and I wouldn’t be tempted into paying more for the ‘no turntable’ types.

Microwave Ovens are very efficient. There are losses in converting mains power to microwave energy but after that most of the energy goes directly into the food. This is why you can cook a small quantity very quickly but larger quantities take longer in direct proportion to the weight.

For example, if you cook one potato in 5 minutes, four potatoes will take 20 minutes to cook.

Conventional ovens use much of their energy input in bringing the oven cavity and the air in there up to temperature. In a microwave though, the energy just bounces around the cavity until it hits a water molecule in the food. That’s why the cooking time is so short.

The biggest use for a microwave is defrosting frozen foods and re-heating pre-cooked foods. You can use them as a cooker but one problem is that they don’t brown foods. You could cook sausages or even a joint of meat but they would appear under-cooked.

Of course you can part-cook and then finish conventionally or get a microwave combination cooker and use the grill to brown food at the end – see below for our experience with this.

We had a wonderful machine with optimum programmes for cooking various foods or you could programme it yourself. It came with a built in browning grill and various accessories and cost quite a lot of money.

Well, after three years the display went so it was uncontrollable and unrepairable. We thought about it and realised we’d never used any of the programmes, I think you needed a degree in computer science to work them out! Neither had we used the browning grill nor any of the accessories. It also had a clock that was always on sucking power. That electronic clock was costing us nearly £10.00 a year alone to run!

What Microwave to Buy?

My advice is to buy the cheapest and simplest microwave you can find. There’s less to go wrong and they do what you actually want them to do.

The replacement for our combination microwave cost us a tenth of the first model and merely has a mechanical timer and power settings. It looks as good, cooks as good and it’s now in its fifth year.