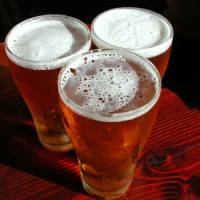 The price of a pint has risen and risen as the government squeezes every last penny in tax it can. By making your own beer you can turn the clock back 30 years and enjoy a decent pint for just 25p!

Making Your Own Beer

The alcohol strength of our own beer will be far less than wine, but be careful, home brew beer is often stronger than you may be used to.

It’s easiest to start with a kit beer. There’s a huge range of concentrates available, formulated for different flavours and styles from lagers to dark bitter beers.

Concentrates generally work out a little dearer than making your beer from scratch, which requires you obtaining hops, malt extract, malted grains etc. But kit beers taste well and give you an opportunity to get used to the process before you take the next step of making your beer from the raw materials.

Unlike wines, you can make beers in a plastic bin without the airlocks etc or in a fermenter. Beers are ready to bottle in a matter of 10 days or so but rather than individually bottling, which requires beer bottles, caps and a machine to apply them, most people nowadays use purpose made tapped barrels and just pour out as required.

Usually the kit beers just comprise a tin with the base malt etc and a packet of yeast. You warm the opened tin to soften the contents and mix with boiling water and sugar. A kilogram pack of sugar is usually added and will result in a beer with a strength around 5.2%. There will be instructions on the tin.

You then put this into your fermenting bin and top up with cold water to 5 gallons.

When the liquor has reached room temperature add the yeast and that’s about it until you bottle up or put into a barrel. Anything from a week to two weeks later you will be drinking your own beer.

Most kits are geared for 40 pints, 5 gallons so you’ll need to get a few friends around to help you drink it!