I’ve decided the biggest growing pains in a little one if the cost on the wallet of new shoes! Clothes are easy, I can make them, buy them second hand, or pick up bits with good resale value in the sales. However, shoes we need to have fitted. Gabe has very narrow feet and most trainers and shoes just swamp him. We had him fitted 8 weeks ago and a new pair were bought, last week while away he complained his feet hurt so we popped into Clarks as we didn’t know of any independent fitting shops in the area. Two sizes they had gone up – in 8 weeks! I knew he had shot up in height too as trousers were heading up his legs, but I hadn’t counted on another pair of shoes so soon.

There went the budget. Realising his shoes cost nearly as much as mine and his dad’s combined. They do have very snazzy light up dinosaurs though which he is rather thrilled with. 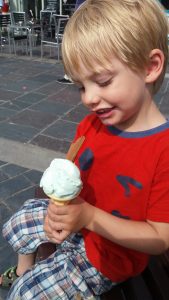 We are trying to reduce our waste here, switching to reuseables when possible, and generally being more mindful about what we need or just want. With Gabe’s feet meaning yet another new pair of shoes it made me think about disposable fashion and how many clothes and pairs of shoes end up in landfill.

We buy a lot of second hand clothing. Children shoot up within weeks of buying at Gabe’s age and so I check local charity shops for most of his bits. I do sometimes have to buy trousers as he is very slender and needs a waist that can tie or be brought in. I have also used elastic and buttons to bring in charity shop finds I’ve really loved, but that fall off his hips.

I also try to keep my shopping for clothing contained to charity shops. In fact the main things me and Gabe buy outside of them are underwear and shoes. Gary seems to struggle with charity shops though as he has quite short legs – and the men’s section never seems as good. This to me actually shows though that women on the whole are worse for buying into disposable fashion – the fact charity shops are full of it.

We need to curb spending and thinking of clothing as one season throw-aways. It is unsustainable. Not only for the environment, but also the workers who rarely receive a fair wage for the clothing being made. If getting rid of clothes my order is: sell (if good resale value I list on facebook groups or ebay); rehome to friends with little ones; donate to charity shop; or finally turn to rags. I now have lots of rag clothing backed with old towels that make for great kitchen roll – so saving on another disposable item too.

We’ve been quite lax recently with meals and when we went away we ended up eating out a few times. This just isn’t sustainable on our budget so this weekend I bulk bought and cooked to restock the freezer. We’ve now got stew packs, lasagnes, chicken and fish strips, chilli and spag bol sauces, and a few other home made ready meals. It should make life a bit easier in March, and with the electric pressure cooker we can reheat sauces from frozen fast so no excuse to pop to the shops or worse still takeaway.