Judging by the tone of recent remarks from Bank of England chief Mark Carney, the current period of record-low interest rates is set to continue for the foreseeable future. Even though inflation often drops below 1%, most people choosing to save money will probably be losing out in real terms for some years yet. 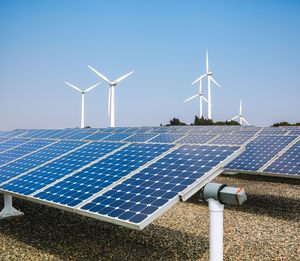 That doesn’t necessarily mean that everyone needs to spend every pound they earn, as there are plenty of other options for savings whilst interest rates remain at rock bottom. If you are able to take on more risk than most, investing – via derivatives, your ISA or stockbroking – can be a way of doing just that. Always remember that there is a chance to lose out as well as gain, though.

For many, green or sustainable living and investment don’t always mix. Several companies, though, are defying that viewpoint: getting involved in making green products or spreading environmental thinking whilst providing an attractive opportunity for investment.

Perhaps the most well-known example of an environmentally friendly company drawing the enthusiastic attention of traders comes from Tesla, the electric car manufacturer that has been making the headlines over in the USA. Its dominance across the Atlantic may not yet have translated into the UK –sights of a Tesla on the streets remain rare – but the company’s enthusiastic CEO Elon Musk has spoken of his intention to drive success abroad.

It isn’t just in the manufacturing of high-end electric cars that can compete with their more traditional rivals that Tesla stands out as an environmentally beneficial business. It has become actively involved in ensuring that other car manufacturers are also able to develop green models as effectively and efficiently as possible. To that end, Tesla has committed to allowing any of its rivals to use its patents without fear of legal action.

Encouraging such altruistic activism from a major business via investment can help investors all over the world get behind Tesla. So far, it has also yielded a healthy return: anyone who invested in Tesla at the beginning of this year would now be seeing around 70% growth. You can calculate the value of investments using this handy stock market calculator.

Another company that’s been driving US take up of more sustainable energy is SolarCity. Once again, Elon Musk has had a large part to play in SolarCity’s success both as a business and as a driver of environmentally sustainable technology. The company was founded by two brothers, Peter and Lyndon Rive, from a concept supplied by Mr. Musk (who is their cousin). He is now the chairman of the company, and had a hand in helping get it started back in 2007.

SolarCity has kick-started a craze for solar power, starting in California and now sweeping across America. The company has over 168,000 customers across 15 US states, and has stated that it is aiming for over a million customers by mid-2018. Like Tesla, the company is driving down costs with a gigawatt factory that uses scale to make solar more competitive than other utilities.

The company is listed on the NASDAQ, where it has increased its share price from $8 back when it listed in December 2012 to over $50 today. Alternatively, SolarCity recently announced that it would start selling ‘solar bonds’ directly to the public via its website. The bonds are the first of their kind in America, with prices starting at $1,000 and offering up to 4% interest over one to seven years.

Using crowdfunding to accelerate solar development could well be a fantastic way to allow sustainable energy’s biggest champions to back the technology as easily as possible. At the moment it’s only open to US nationals: but if the venture is a success then British companies may well start considering it as an alternative to traditional financing. Investors in Europe can still back SolarCity via its share listing.

There are plenty of other companies and green investment opportunities that go against the notion that investors have to put earning returns above all other concerns. For anyone that is getting frustrated with the lack of viability in the current savings market, the chances are that there is a project to get behind that offers a real alternative.

Spread bets and CFDs are leveraged products and can result in losses that exceed your deposits. The value of shares, ETFs and ETCs bought through a stockbroking account can fall as well as rise, which could mean getting back less than you originally put in.

This information has been prepared by IG, a trading name of IG Markets Limited. The material on this page does not contain a record of our trading prices, or an offer of, or solicitation for, a transaction in any financial instrument. IG accepts no responsibility for any use that may be made of these comments and for any consequences that result. No representation or warranty is given as to the accuracy or completeness of this information. Consequently any person acting on it does so entirely at their own risk. Any research provided does not have regard to the specific investment objectives, financial situation and needs of any specific person who may receive it. It has not been prepared in accordance with legal requirements designed to promote the independence of investment research and as such is considered to be a marketing communication. Although we are not specifically constrained from dealing ahead of our recommendations we do not seek to take advantage of them before they are provided to our clients.