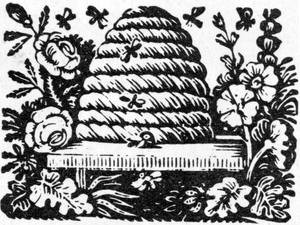 This ancient mead recipe, dating from who knows how far back, was found in an 18th Century book.

Technically it could be argued that it is actually a  metheglin but ‘A rose by any other name would smell as sweet’.

There’s an updated version of the recipe below the original. I’ve scaled it down from 13 gallons to about one gallon!

Mead. To 13 gallons of water put 30 lb of honey; boil and scum it well; take rosemary, thyme, bay leaves and sweet briar one handful together; boil it an hour, put it into a tub with a little ground malt; stir it till it is lukewarm; strain it through a cloth, and put it into a tub again; cut a toast and spread it over with good yeast, and put it into the tub also; when the liquid is covered with yeast, put it in a barrel; take of cloves, mace and nutmegs, an ounce and a half; of ginger sliced an ounce; bruise the spice; tie it up in a rag, and hang it in the vessel, stopping it up close for use.

At this point you have 2 options.

Mead is best stored for a year prior to drinking. Some prefer to store it for a year in a demijohn and then rack again prior to bottling.

See Also How to Make Mead