↓ Skip to Main Content
Home › Children › Life gets in the way of Living! Slow Cooker to the Rescue.

Life gets in the way of Living! Slow Cooker to the Rescue. 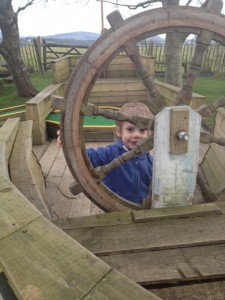 Sometimes everything groups together at once, work, personal, health, and with so much to be done it feels you are achieving nothing. Only once out of the other side do you start to get some perspective on the whole situation again. Well, we’ve been having one of those months here and whilst other work tasks, personal situations, and health got sorted; my blogs got rather neglected.

We’re finally on top of the personal matters, health wise I can now stand and walk in a straight line again (wow inner ear swelling and infections make you feel all sorts of weird!), and work – well work is still there in mountains, but feels more achievable now everything else is back on track.

We’ve also been making the most of the sunshine the last few days. Gabe is thrilled that he can get out on his bike and run around in the garden again. We made use of our season pass for the local Sea Zoo last week now it has reopened, Gabe loved pretending to be Pirate Gabe sailing the playground ship more than anything! We’ve only a month left on the pass so think we’ll squeeze in a couple more visits too.

We are still on track with the Financial Fast and also making inroads into our own clutter too, which was one of my aims at the start of the Fast. It is a lovely feeling when cupboards and draws aren’t just filled with junk that you have “just in case”. Gary is awful for this, when we last moved house we very nearly had a huge row about a bag of wire coat hangers that had already made two house moves with us; he was adamant they may in the future come to some use. Thankfully 18 months on that use has yet to be found (bar the obvious hanging of clothes, which we have dozens of spare hangers for anyway). Now I just need to convince him to part with some of his cable and wire stash, I have been told that just because he doesn’t know what half of them connect to, doesn’t mean they won’t be of use in the future – I fear this will be a long decluttering battle!

A few weeks back I managed to pick up some great yellow label reductions in the supermarket when I popped in to buy some flour. Okay, so my £2 shop turned into £20, but the savings for the rest of the month were huge! Two whole organic chickens (1.6kg each) reduced down to under £3 each, two lots of British rib eye steak (500-600g packs) reduced down to under £2.50 per pack, 3 packs of 6 free range pork sausages down to £1.20 per pack, and finally organic salted butter at 45p per 250g pack – so I grabbed all 8 off the shelf! Clearly our local Tesco overstocks on organic and free range items – a great win for us this time though.

Everything got put into the freezer for later use bar one of the chickens which we roasted that night and then I stripped the carcass (enough meat for two more meals on it) and used the bones for a stock which I always make in our slow cooker. 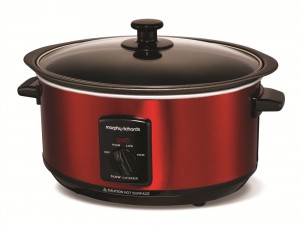 If you haven’t got a slow cooker it really is a great investment. Not only does it mean that on those days that you won’t be home all day, you know dinner will be waiting, but it is also super cheap to run. When our old 3.5l slow cooker broke last year I spent a while researching slow cookers and decided to up the size – to a 6.5l cooker – and to get one that you can also sear the meat in thereby saving me using multiple pans (I hate washing up!).

I opted for the Morphy Richards Sear & Stew and have been really happy with it. It is big enough to cook a large whole chicken in it, or to batch cook up a bolognese sauce or chilli – so there is plenty for that evening’s meal and to freeze up too.

These past few weeks I would have been lost without it. Either that or the budget would have gone to pot, which we can not afford at the moment!

Making stock is a great way to use up everything from a chicken (or any on the bone joint of meat), I hate waste and by just throwing the bones away you are losing out on not only another meal, but lots of goodness too. A good stock can be used in a soup, to cook a delicious risotto, or even just be drank hot with a pinch of salt.

If you have a slow cooker all you need do is throw in some chopped onion, carrots (or any veg peelings you have saved from meals during the week), the bones, and then water to the top. Pop it on high for an hour, then down to low for a further 12-24 hours – the longer it goes the more nutrient dense and tasty it becomes. If I remember I throw a bouquet garni in an hour before it finishes, but if not I add herbs and spices later depending on the meal it is going to be used in.