The Summer sun is here and it is so lovely and warm it feels almost as though Summer has arrived early. We’ve spent as much time as we could outside, which with a toddler means lots of fun. From water fights with daddy to building sandcastles and splashing in his sand and water table, Gabe has really enjoyed this weekend. 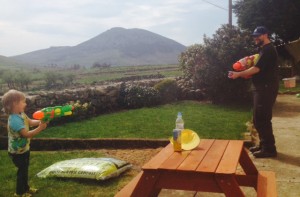 We’ve also now turned the Aga off for the Summer too. The kitchen soon becomes unbearably warm as the temperatures rise. Yesterday the outside temp was around 23, so pleasant but not overly hot. In the kitchen it reached 28 so I decided enough was enough and off the Aga went.

Cooking Without an Oven – Kitchen Gadgets

With the Aga off it means we are without an oven for the summer. This isn’t so much of a problem with a few kitchen gadgets that for me are used more often than the Aga anyway!

Slow cooker & pressure cooker – this for us is an essential. I did have a slow cooker and a stove top pressure cooker, but when the slow cooker broke this Winter I replaced them with a combination slow and pressure cooker. The Instant Pot is the most common and highly reviewed of these kitchen gadgets, and there are other makes too – we have a “Pressure King Pro” I picked up off eBay brand new but for a fraction of the retail price (I think it was an unwanted gift someone got given).

The slow cooker element is great for stews and stocks, but both of these and so many other recipes can be made in the pressure cooker mode too – rice is so fast and simple in it. It is great, if like me, you sometimes forget to pull something out of the freezer for dinner.

Health grill – we’ve had a health grill for years. Often it has just ended up as a bulky toasted sandwich maker, but when the Aga is off it is used a lot. From meats and fish to char-grilled veggies, it really does help take up the slack without the oven to roast in.

Induction hob – we have a small induction hob which we picked up in Aldi. I find this is used when I need to do a large dinner even if the Aga is on, such as at Christmas. Great for reheating soups or anything else you need a stove top to cook on.

I’m also hoping that with good weather like this cooking will be minimal anyway so lots of salads and spiralised veggies eaten out on the patio on warm Summer evenings.