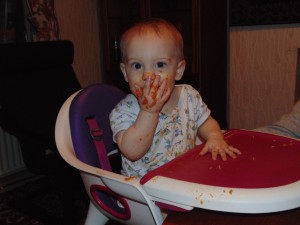 As a family we try to eat as organically as possible. This is hard though when on a tight budget each month. While carrying out our financial fast since November of last year we have found the toughest area to keep tight money wise has been the food budget.

Cutting extra entertainment has proved fairly easy, especially when dry days as we just get out into the garden or the surrounding hills and beaches. Not eating out is fairly easy too as we are so rural we can’t face the drive to go out of an evening! However, I do want eat as clean and healthy as possible, especially for Gabriel with his growing body.

I see a lot of people worrying about the cost of feeding babies and young children, but it needn’t be either stressful or more expensive than the normal monthly food costs.

Until Gabe was two-and-a-half he was breastfed. The first six months of his life exclusively so, bar a small supplementation of formula whilst in neo-natal and children’s ward after he was born. Then he was fed on demand, gradually reducing his feeding and increasing his food intake. Now, I know many struggle with breastfeeding. We did. So much so I was crying with pain at one point and having seen numerous health visitors and the GP was very close to stopping. I was then given details of a lactation consultant, who managed to identify the feeding issues (a tongue tie which restricted his ability to feed and caused me pain) and once we resolved these problems it was plain sailing with a content baby.

If you want to breastfeed getting the right support is crucial. Knowing before the baby is born where local breastfeeding support groups are and where peer supporters will be present is key. In those first few weeks it is hard work, but in my opinion getting up and actively making bottles in the night would be harder! It is nature’s free food, and so saves you money not having to buy formula as well as not having the health risks that come with formula too (please understand I think formula has its place, such as when Gabe had small additional amounts in hospital or for those who cannot feed whether through no supply or lack of support). 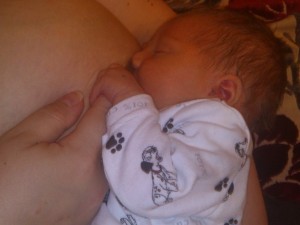 I genuinely think that with the right support, which sadly is something the Government is funding less and less, most people who want to breastfeed can. Please if you see local services being cut offer them your support, by saving breastfeeding support we are saving breastfeeding relationships which is crucial for future health. There will always be those who choose not to breastfeed, and as long as that is an informed decision it should always be respected. I am concerned though that the cutting of funding will stop those who genuinely want to naturally feed and force them to move to artificial feeding because the support is just no longer available.

When it came to weaning we went for the baby-led weaning approach. Gabe was given what we were given and allowed to squidge, mush, play, and occasionally actually eat a little of it – all while still having milk on demand. He took to it amazingly and it saved me having to worry about making him different food and thereby increasing the monthly food bill. Obviously some foods need to be avoided to start with, such as honey which is not recommended for under 1s, but almost everything you eat baby can eat – just cut it into appropriate fist grabable sizes. I found the book Baby-Led Weaning by Gill Rapley to be a fantastic guide and highly recommend reading it to those who are about to start weaning their baby.

One rule we have is everyone eats the same, unless I make a meal I know someone truly dislikes. This is mainly for Gary though not Gabe as he won’t eat fish, but me and Gabe both do! I refuse to cook different meals for everyone and also want meal times as family time. We eat breakfast and dinner at the table together. Yes sometimes like any toddler Gabe will declare all food on the table “yucky”, but on the whole if we are eating he will eat too.

One bite rule – if a new food is put out I ask that he just takes one bite and say that if he doesn’t like it he may spit it out into a tissue. This actually works really well and only olives and celery have had the spitting treatment in recent months!

Eating Organically on a Budget

I was thinking the other day about how we eat as organically as possible, but still on a tight budget. Although I’ve touched on this before I think a full post on it will help others in the same position. So next blog will be all about this, and even if not wanting to eat organically will hopefully have a lot of tips to keep you track for family meals on the cheap.