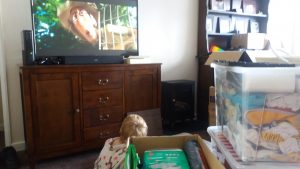 Well, sorry for the blog posts lacking recently, but we ended up moving home somewhat sooner than planned as we lost all clean water at the old house, and did so in complete chaos. In keeping with the landlord’s complete failure to get anything done of the house, they basically just told us to get out after the water supply failed. Thankfully we were able to bring our new place’s move-in date forward, but we still had nearly 10 days of no home as a result! It was incredibly stressful as well as very costly, so our frugality was tested to the extreme.

With no clean water and then no where to live, we had no cooking facilities, so we had to eat out a lot. Add in lots of fuel costs from staying at other people’s houses, but having to return to the old house to feed the cats and pack, and it soon hit over £200 just for this. Extra removal costs as we had to change the dates, two sets of utility bills (since we had nearly a month of rent we’d already paid on the old house so were liable for the bills), and a plethora of other costs we hadn’t anticipated. It really did stretch the bank!

Of course, we’ve got lawyers on the case now to recover these costs and rent etc from the landlords, but the stress has put so much back both work and life wise. Gary has now started his new job though, and now is the time for us to get back on track. Both with work and our financial fast!

So with the move and chaos surrounding it I stopped tracking so much. We pretty much just went for spend whatever was needed to get out of the mess we’d been left in. Now though is time to reconcile the accounts and get back to frugality.

First things first I did a big freezer check. We had planned to empty the freezer down the last month in the old house, so we’d have had little in the way of food costs and less to move, as it was though we ended up moving a full chest freezer with us. Then I did the same with the store cupboard. Turns out I’d been hoarding spelt flour when on offer, so lots of recipes to use that up over the next month or two!

With how much we’ve got in the freezer and store cupboard we’ve needed very little this month – bar fresh vegetables and milk/dairy. It will be the same in October and November too, so should let us catch up a bit on the budget.

To keep myself in check I plan to blog each week about the planned meals, including lunches and snacks that we make. I’ll post our budget and where we buy from, but also which supermarket would be cheapest to make the meal from as well.

This week we are stocked up with everything so in theory we need to buy nothing! I’ve currently got a batch of chicken stock on the go to make soup with, and some bread dough rising to make a fresh loaf. Dinner tonight will be left over lamb made into a curry with roasted root vegetables (we’ve some delicious squashes from the local CSA).

The tomatoes are overflowing in the greenhouse at my parents so I suspect plenty of tomato based dishes this week too! 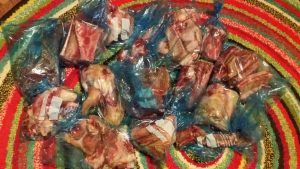 Talk to Your Butcher

If you eat meat the best way to remain frugal is to eat the whole animal. Use organ meats such as liver or heart as these are super cheap and nutritious. When making a roast save your bones to make stock. Or, if you have a local butcher ask about having bones.

Our local farm shop raise and butcher all their own animals. Their cows are out on grass almost all year round (bar very inclement weather) and the beef tastes amazing. They also have a lot of bones, which if you ask they will give you for free.

I asked for some beef bones, and ideally some marrow bones. The amount we were given was huge! Just one slight problem, they hadn’t butchered them down for us. So Gary and my Dad were hard at work cutting them for me, so they were in prefect roasting and stock pot size portions.

Beef stock is simple enough. Throw in one onion, a carrot, and some celery if you use it (we don’t have celery in so it is never used in stock), plus the bones. It is best to roast the bones before making the stock, just 20mins at 220 will do the trick. They pop it in the slow cooker on low all day, for a delicious and gelatinous, rich stock/broth.

Beef bones and onions in the slow cooker.

Scooping the fat off the stock to use for frying.