↓ Skip to Main Content
Home › Children › It’s One Thing After Another so Back to Meal Planning!

It’s One Thing After Another so Back to Meal Planning! 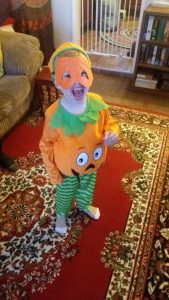 Just as things start to even out again financially the car decided it would be a good time to break. I took it in as I knew we needed to replace the front tyres before Winter, but also found a few others problems that needed sorting fast. £200 worse off and our budget for the year has officially gone to pot!

The financial fast and keeping on top of outgoings really hasn’t gone well the last 3 months. In part this has been due to how stressed things have been with the problems with the old house, then the move, and then just a general depression about the whole matter as it is still ongoing in the background. It is now at the stage of lawyers and insurers battering things out. Hopefully it will resolve before the New Year without us having to take them to Court though – one relief, phew!

Thankfully we are pretty much sorted already for Yule presents for Gabriel, so we can at least keep a close reign on the finances until the end of the year. Gary wants a couple of books, and I want some new crock lids for fermentation – less than £25 for both of us. I’ve also managed to pick up a lovely non-chocolate advent calendar. Last year in a last minute supermarket dash Gabe ended up with a chocolate one. Not only am I not keen on the idea of chocolate everyday, but he really could not understand why he couldn’t eat them all on day one – so this year forward planning is the key!

We will be having Christmas dinner with my parents. Last year we hosted, but this year with such a small house and kitchen we will head over there. It is only a 15 minute walk, so we can even have a tipple and walk if we fancy it. My parents make a fantastic Christmas dinner and it is always tastier if you don’t have to cook. 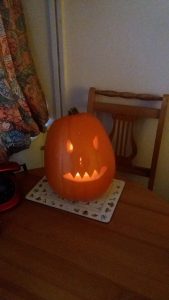 This weekend we’ve been carving pumpkins and dressing up for Halloween. Often when carving pumpkins so much goes to waste. However, everything can be used. The pumpkin seeds are delicious roasted. Savoury they are great with a little sea salt and olive oil, sweet you can add a little honey and cinnamon. The inners can be used in puddings or soup. I like it cooked with broth and spices for a warming spicy soup.

If you don’t know what to do with leftover pumpkin we’ve a few recipes here on the Recipe Pages.

To try and be a bit more organised I made a cupboard and freezer list and planned meals for the week ahead. I’ve planned a few “roll-over” meals to make life a bit easier.

Wednesday: Roast chicken – stripping the remaining meat and making broth from the bones

Thursday: Soup with sourdough – using broth from the chicken and any veggies left in the fridge/cupboard

Friday: Lasagne – using the remaining 1/3 of the bolognese sauce

Saturday: Pizza – we make a sourdough crust and then add our own veggie and cheese toppings

Sunday: Chicken & Vegetable Pie – using the rest of the meat from the chicken

It is quite a stodgy menu, but the change in weather and Gary’s long work days at the moment means we are all craving more substantial meals. Plus they are all Gabe’s favourites, meaning less toddler related meal battles! Roll-over meals help make the most of meat so you use every last bit – saving money at the same time.