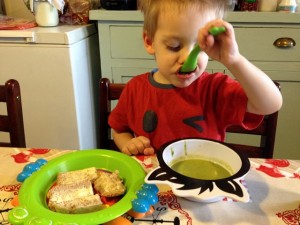 So far, so good on the food budget front. We’ve found it fairly easy to stick to, and we have a little left over each week to put aside. Anything we’ve saved on the food budget this month will be being used to buy a small food parcel for the local food bank at the start of next month. It won’t be much – maybe £15 or so – but enough to buy some basics and maybe pop an advent calendar and a few other bits in.

We have struggled more on social spending – eating out mainly. When you have a tired and grumpy little (or big) man and haven’t planned food to take out with you, it ends up with last minute coffee, cake, and sarnies. It meant this week we spent £10 instead of the planned £5, but last week we hadn’t used any of the budget so it evens out thankfully. We’ve not bought any non-necessary bits and pieces though, although I did feel rather bad telling Gabe that Minions couldn’t go in the shopping basket, he soon forgot about it!

I had hoped to be blogging on here a few times a week, but illness hit hard and it has been ten days! First off Gabe was really unwell, then of course as he perked up it hit me, then just as we all seemed better he became croupy and we’ve had a few more long nights. Fingers crosses though we are finally coming through the other side of it now though!

One problem I have found whilst ill was the food plan failed. I stick to it well, hubby struggles a lot more and although he tries to cook his culinary skills are more suited to beans on toast. So we have ended up picking up a few bits in the reduced bin in the Supermarket and other quick foods. Thankfully still on budget, but we’d have made far better savings had we not gone off track.

It is worth looking out for offers on veg boxes, home delivery services (like Hello Fresh!), and at supermarkets, that mean free food. This week we have had a free Hello Fresh box with three meals in it. It isn’t something I’d buy normally as I could put together the recipes for a fraction of the cost, but when offered for free I’d be daft not to take up the chance.

I’ve also seen a fair few free veg box offers floating around, some require you to have bought a few first, but others give first box free or half price – worth looking into and taking advantage of if you can.

Another money saving tip food wise is to get signed up to Tesco Orchard if you shop with them. They send targeted vouchers usually worth around £5.00. This week we had some for their frozen Healthy Balanced range as well as frozen fruit/veg. If already shopping with Tesco it is worth checking out. As you can see Gabe rather enjoyed his tasty free soup!

One comment on “So Far, So Good Budget Wise & Free Food”