The bicycle is the most efficient machine ever created: Converting calories into gas, a bicycle gets the equivalent of three thousand miles per gallon. ~ Bill Strickland, The Quotable Cyclist 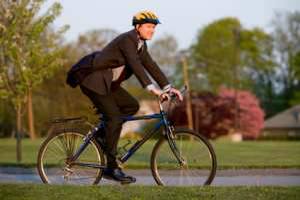 Keeping Fit on a Bicycle

No big outlay, no MOT, no Road Tax, no insurance, no fuel, no major servicing jobs.
What better way to save money and keep fit at the same time.

The perfect alternative to a second car and as they say (if you’re just going down town) “He won’t get there any quicker”!!

There’s a grand theory that bicycles are either for the young fit athlete, or the poor old codger who can’t afford anything else, see where he’s going or just hanging on to a dream of being young again!

In this age where ‘green’ is both politically and environmentally friendly, there are more cycle paths being laid through towns and their surroundings and even better than the Moped, you can literally go from door to door.

No more parking the car for £2 an hour, then walking around the shops getting tired and irritable, no more fumed traffic jams waiting to get into the car park and no more frustration at the Petrol Station where you’ve lined yourself up behind the 4×4 putting 30 gallons of petrol in etc.

All you need is one bike, a 25 litre rucksack (or a luggage rack), one helmet and maybe reflective bands for your jacket and you’re away to a life of frugality and better health!

Is it that simple – yes it is, assuming you’re relatively healthy in the first place of course.

Standard bicycles can be purchased from anywhere around the £60 mark and go up to £600 for the mega geeky and keen mountaineer (or they think they are!!).

If in doubt, try it out before you sacrifice your car. Maybe it’s just an alternative to a second car which you use only on rainy cold days.

Every decent town has a ‘Bicycle Repair Shop’, should you require any maintenance which is beyond your capabilities, although most repairs are usually carried out using half a dozen screwdrivers, Allen keys and an adjustable spanner. Oh yes – don’t forget the 3 in1 oil. Buying a bicycle maintenance book would be beneficial.

Many local authorities have Cycle Training Days which you can sign up for should you feel a quick safety check up on yourself is needed.

Overall, 38% households own a bicycle. Households with children are more likely to own bicycles. In 1993/95, 54% of households with one child and 69% of those with two or more children owned cycles, compared with only 12% for pensioner households and 38% for other childless households.

Cycle ownership is strongly linked to household income. Overall, about a quarter of households in the lowest 40% of incomes owned a cycle, compared to nearly half in the remaining 60 per cent